How Are Solar Panels Made?

Solar panel technology has increased significantly in recent years resulting in panels that achieve far greater efficiency. Solar panels provide a long list of benefits including no emissions, no noise, and no moving parts – not to mention incredibly long lifespans – they’re one of the key technologies driving our transition to clean energy. But have you ever wondered how solar panels are made – and what materials are needed to make them?

This article explains all the ins and outs of solar panel manufacturing, so let’s dive in and take a closer look.

What Are Solar Panels Made Of?

In addition to producing clean energy, solar panels also have a small environmental footprint because they’re primarily made of just three simple materials:

Silicon is the critical ingredient in each solar panel that creates the “photovoltaic” effect of converting sunlight into electricity. Thankfully, despite the soaring demand for solar systems in recent years, silicon is the second most common element in the earth’s crust behind oxygen and is most commonly found in sand. But despite its abundance, only silicon with purity above 99.99% can be used to create solar cells, so it requires several rounds of refinement using furnaces that burn away impurities.

Glass provides each module’s protective covering, although it’s not the type you’ll find in your household windows. Instead, solar panels use low-iron tempered glass – often called safety glass or toughened glass – which is strong enough to withstand large hailstones and even the odd wayward cricket ball. The thickness of solar panel glass can vary depending on the brand, but it’s generally between two and five millimetres thick. But even though it’s incredibly robust, solar panel glass is not unbreakable, and a severe impact can still crack it into small fragments, much like a car windshield.

Metal appears in two areas of a solar panel: the outer aluminium frame, and the thin copper or silver wiring that covers and connects all of the cells. The outer frame serves two purposes: it holds the panel together and provides the clamping points needed to attach each module to the mounting system. Most quality solar panel brands also anodise their aluminium to prevent salt damage in coastal environments. The wiring found on and between each solar cell is generally made from copper or silver (or both), which are electrical conductors that facilitate the flow of energy. 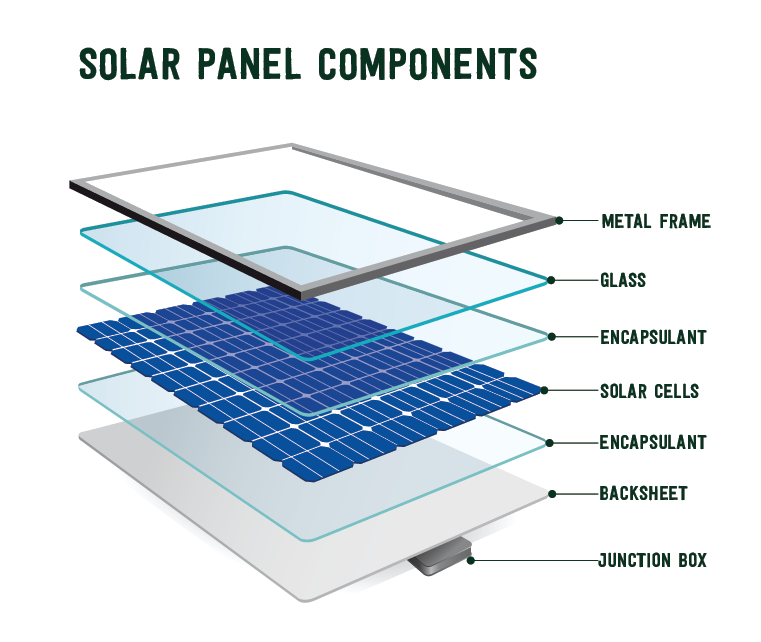 In addition to silicon, glass, and metal, there are also some other key materials needed to create a long-lasting solar module. The cells and wiring are sandwiched between two thin layers of EVA (Ethylene Vinyl Acetate), which acts as a shock absorber that holds everything in place through varying weather conditions. Each solar panel also features a white back sheet made from a polymer such as Tedlar that protects the cells from dirt and moisture while providing electrical insulation.

The process of making solar panels

At first glance, the solar manufacturing process can seem fairly technical. But following decades of innovation, all leading solar brands now use advanced, highly automated factories that produce millions of panels with incredible speed and precision.

Here’s the process of transforming the raw materials into a finished module:

It all begins with creating the solar cells – initially called wafers – which requires turning raw sand into high-purity silicon. To do this, manufacturers use a large arc furnace running at up to 2000°C that burns away impurities and produces jagged silicon rocks. This silicon is now around 99% pure, which is perfect for most applications, but it’s still too low for an efficient solar cell. The rocks run through a second cylindrical furnace, which purifies the silicon further.

Boron or phosphorous is added to the purified silicon to assist with creating an electrical charge. Boron is used for P-Type cells and phosphorous for N-Type cells. The ‘doped’ silicon then gets melted down into a large tube-shaped block, known as an ingot.

3. Ingots get cut into thin wafers

With blocks of pure silicon now at the ready, the manufacturer needs to cut each ingot into the super-thin wafers that eventually become finished solar cells. You can think of this process a little bit like slicing up a loaf of bread; only it uses special diamond wires that work with incredible accuracy.

Each newly-cut wafer, which is less than half a millimetre thick, then gets coated with either a P-Type or N-Type layer that applies a positive electrical charge to one side and a negative charge to the other. As silicon is a naturally shiny material, each wafer also receives an anti-reflective coating to maximise its light absorption.

5. Busbars and fingers are added

A wire printing machine covers each cell with vertical “busbars” and horizontal “fingers” that create pathways for electricity to travel once the cells are exposed to sunlight.

With finished cells now ready for assembly, they’re soldered together in groups of 60 or 72 as a matrix-style grid, sandwiched between two layers of transparent EVA, and baked at high temperatures. Machines then attach a protective back sheet to the rear of the panel, a pane of tempered glass on the front, and seal everything together with an aluminium frame.

In the final step, the manufacturer attaches a weatherproof junction box to the back of the module, including the cables needed to connect panels together during installation.
Before leaving the factory, each completed solar panel undergoes a series of quality-control tests and a final deep clean. Then, it’s packed for transport – and ready to install on a rooftop just like yours.

If you’re considering making the switch to solar energy for your home or business, we can make your journey a much smoother ride. We offer a free online solar calculator that can project your estimated savings, payback period, system cost, and even your return on investment, and then connect you with three recommended solar installers in your local area.