How much canyou save?

The Australian government will give you a rebate on the purchase of solar panels. The solar panel rebate varies depending on where you live, the system size you install and on market prices, but typically, the incentive will save you between $2,500 – $3,300 off the price of a 5kW solar system.

Your government solar rebate varies depending on your system size and your installation location. Calculate your solar panel rebate using our STC calculator. 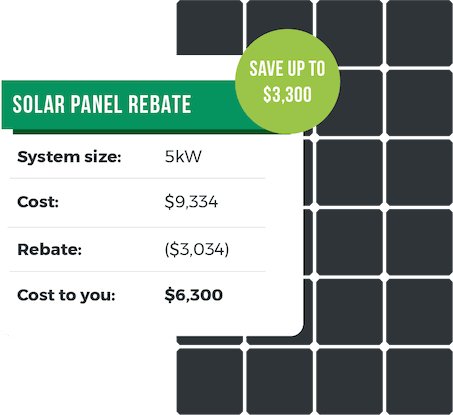 The size of your system and your property location affect the rebate you are entitled to.
1

The solar panel rebate, or financial incentive (correct government term), is issued in the form of Small- scale Technology Certificates, commonly referred to as STCs. Each STC carries a monetary value that fluctuates between $34 – $40.

When you purchase a solar system, you’ll receive a certain number of STCs according to the size of your solar system and your location. The total value of these certificates is your solar panel rebate amount.

When does the government solar rebate end?

The Australian government solar panel rebate is scheduled to end in 2030. However, each year, the solar rebate reduces, so now is the best time to invest in solar panels if you want to maximise your rebate savings.

Annual reduction in the solar rebate

Things you must doto get your rebate

Claiming your solar panel rebate from the government is typically straight-forward. However, there are a few things you need to do to ensure you receive your buying incentive. 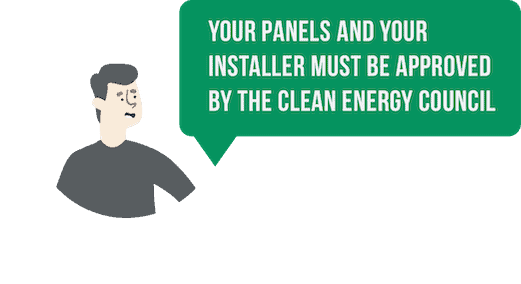 Your solar panels must be on the Clean Energy Council’s list of approved modules to receive your solar rebate. If you are buying high-quality panels, you needn’t worry about this condition.

If an installer with Clean Energy Council accreditation does not complete the installation of your solar power system, you will not receive the solar rebate.

Your installer company will likely handle the process of claiming your panel rebate and subtract it from the purchase price of the solar power system. However, if you do not claim the rebate within 12 months of the date of installation, you will not receive your savings.

In addition to the Australian government solar panel rebate, you may also be able to receive an incentive from your state government. There are several schemes in place that can further reduce the cost of solar panels and batteries.

If you are eligible for the Victorian solar rebate, you can claim up to $1,888 off the purchase of a new solar panel system. The scheme also has rebates for batteries and caters for renters.

The South Australian rebate allows you to claim up to $6,000 off the cost of a 10kWh solar battery. This incentive is available for purchases of new hybrid systems. The amount of the rebate is $500 per kWh of battery storage unless you are an energy concession holder if so you can claim $600.

The Queensland solar rebate scheme is on hold until further notice. However, buying solar power in Queensland is a great investment, even without any state incentives.

How the solar rebate works

Australian rebates are applied via zones

The other variable in determining the value of your solar incentive is system size. The larger the solar panel system, the more power it will generate; hence, why you will be entitled to a greater number of certificates (STCs).

Each certificate is equivalent to 1 Megawatt hour (MWh) of renewable energy. Cleverly, the government doesn’t pay you for each certificate. They are traded on an open market as part of a scheme incorporated into the Australian Government’s Renewable Energy Target. Companies that generate high amounts of fossil fuel then purchase these certificates on the open market to increase their clean energy generation. Therefore, the price of an STC fluctuates depending on market demand for renewable energy. The average price for a Small – scale Technology Certificate over the past three months has been $37.00.

Solar rebates are not feed-in tariffs

Do not confuse the Federal government solar rebate with a feed-in tariff. Solar feed-in tariffs are ongoing; you will receive a buyback from your electricity retailer for every kilowatt-hour that you send back to the grid. The solar rebate is an upfront saving off the cost of a new system and a form of incentive for going solar.

Let us recommend 3 local, certified, solar installers to provide you with a free quote on your off grid system