The effect of orientation on solar output

The direction solar panels face, along with their angle, or tilt, at that orientation; are vital inputs in order to accurately calculate the solar power potential for a property. These two inputs, along with the location of the property, are needed to calculate solar energy at a given site. 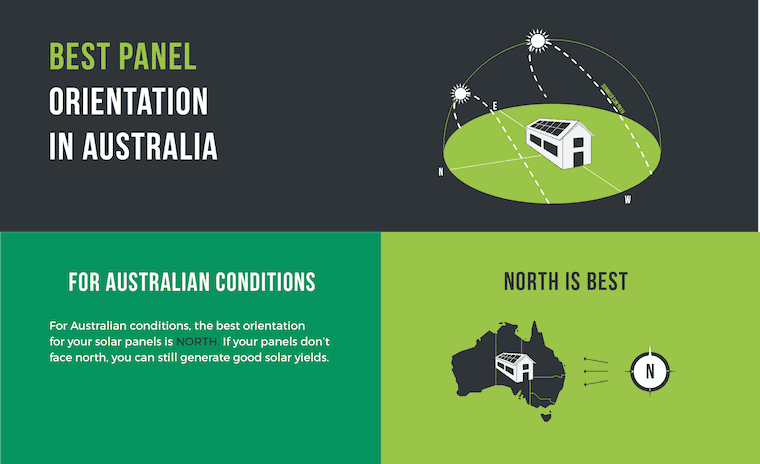 What if your panels don’t face north?

If you reside in Australia, and your panels don’t face north, your property may still be suitable for generating solar energy. If your property faces east or west, panels can still generate good yields. Depending on your location and roof pitch, you’re going to lose somewhere between 10 – 20% efficiency as a result of not having panels facing in a due north direction. If you have the option to place the panels in more of a north-east, or north-west direction, it is recommended. This will increase sun exposure to the panels and therefore increase the systems ability to generate solar power.

If your property is constructed in such a way that you are only able to face solar panels in a southerly direction, then you will lose further capacity, as compared to a north facing system.

The table below shows the efficiency of panels at different orientations; for different locations around Australia (based on a roof pitch of 25°).

When it is not possible to orientate panels in a northerly direction in Australia, a greater emphasis is placed on the angle of the panels. In this situation, a rooftop closer to horizontal, will generate better solar yields. The smaller the roof pitch, the better for south, east or west facing buildings.

Is east or west better?

When you consume most of your electricity, the effect of shading, and whether or not your system has battery storage; are important considerations when deciding whether or not to face your panels east or west.

When your building consumes most of its electricity is important when determining the orientation of your panels. If your household or business uses most of its electricity during the late afternoon hours, then you’re probably better off facing your panels west rather than east. The added financial benefit of this, is that it coincides with the time of day when your electricity retailer will charge you peak rates to purchase power from them. Based on this premise, there may even be some cases where a lower yielding west-facing panel is favoured to a north-facing one. However, careful modelling should be carried out before choosing west over north.

If on the other hand, your electricity consumption is greater during morning daylight hours, then you may be better off positioning the panels to face east rather than west. Again, the renewable energy you generate will save you from peak morning electricity rates.

Shading may be an issue to the east or west side of your property. If it is, and it blocks daylight sun to your panels at any time of day, then it will result in a loss of solar energy generation. If just one side, east or west, is exposed to shading conditions, then consider placing the panels on the opposing side.

How does battery storage affect orientation

If your solar system has a battery that is able to store excess solar energy, you are somewhat insured against peak morning and afternoon electricity rates. You’re better off positioning your panels in whatever direction will maximise daily solar exposure.

If all the talk of orientation, efficiency percentages and peak electricity rates is too much for you, then the expert solar installers that we refer to you are equipped to answer all of these questions for you. They can design the system based on your property details and electricity consumption habits.