The concept of harnessing the power of the sun’s rays dates back to the 7th century BC years when magnifying glasses were used to make fire and reportedly burn ants! However, it wasn’t until 1839 when the photovoltaic effect was first discovered by a young French scientist, Edmond Becquerel. The photovoltaic effect is the underlying process by which solar panels work, and hence, Becquerel is credited with being the inventor of solar panels.

At the tender age of 19, Becquerel placed silver chloride in an acidic solution, which generated voltage and current. Thanks to Becquerel’s experiments, the photovoltaic effect is sometimes referred to as the “Becquerel effect”.

We are thankful to Edmond Becquerel who had the audacity to fool around in his father’s laboratory and understand the photovoltaic effect. However, there have been many significant events and milestones that timeline the history of solar energy from Becquerel’s discovery to the present day.

English Professor William Grylls Adams and his student Richard Evans Day bear witness to the photovoltaic effect in action after exposing selenium to light and producing an electric current.

But there’s a catch, their selenium solar cells couldn’t generate enough from the sunlight it captured. Nevertheless, it was a big step forward; they had managed to generate electricity without moving parts. 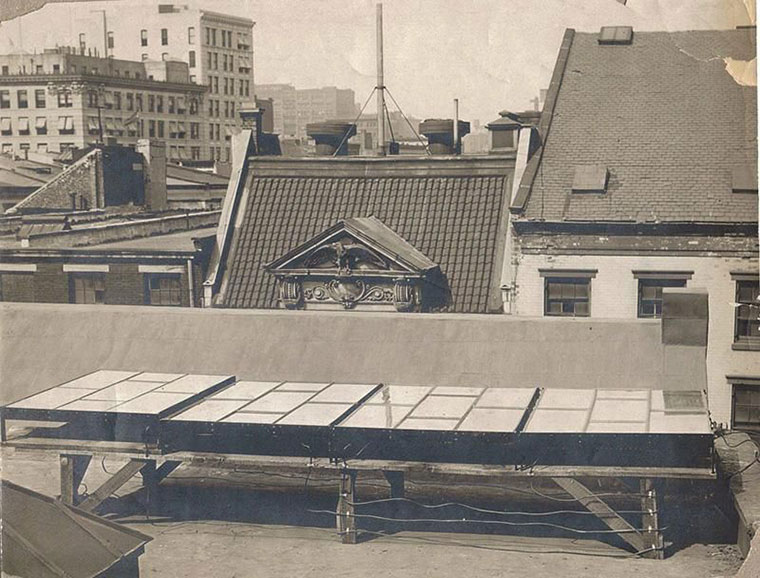 A photo of the first rooftop solar panels installed on a New York building in 1894.

It was the ingenious idea of American inventor Charles Fritts to put solar panels on a rooftop, however, there was a problem. In fact, this problem was so consequential that it would prove to be a major obstacle for scientists for over a century. Fritts’ panels, while technologically commendable for the time, were terribly inefficient, which didn’t make them an economically viable source of energy generation.

How inefficient, exactly? Well, Fritts’ panels had an electrical efficiency of 1%, which was mostly the result of the properties inherent to selenium. However, it took until 2006, 100 years after Fritts’ death, before silicon cells were able to be manufactured at near 40% efficiency—and even then, the industrial average was a paltry 17%. In 2019, the world record for solar cell efficiency had climbed to 39.2%, which was achieved by using multi-junction concentrator solar cells, developed at National Renewable Energy Laboratory in Golden, Colorado, USA.

Despite being around for over 100 years, solar panels were seen as forward-thinking technology when they were first installed on top of the White House in 1979 by President Jimmy Carter (before unceremoniously being removed by President Reagan seven years later). 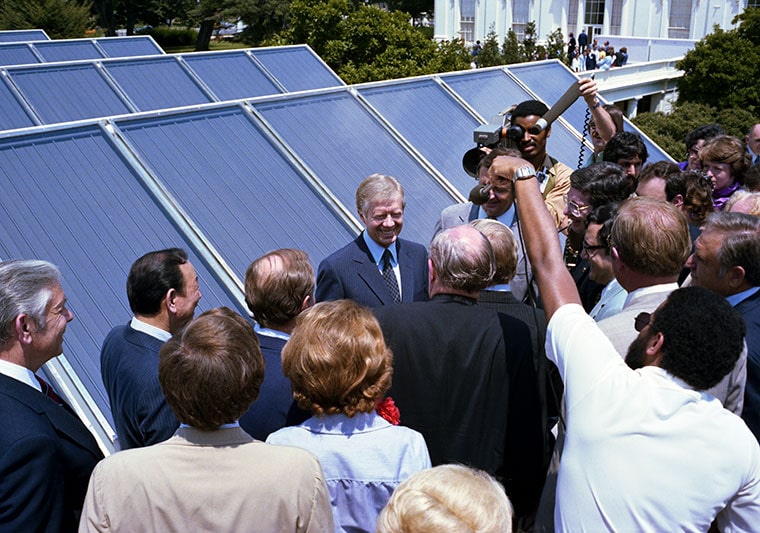 Edmond Becquerel, groundbreaking scientist and staunch proponent of side burns, came from good stock. Edmond’s father, Antoine, was an award-winning scientist in his own right, and Edmond’s son, Henri, continued the family’s legacy by becoming a physicist, Nobel laureate, and a co-discoverer of radioactivity. Suffice to say, the Becquerel family pulled their weight when it came to advancing science!

The future of solar panels…

Thanks to the trailblazers listed in this article, the future of solar power is bright. In fact, solar is now the most effective generator of energy per kilowatt-hour.

Where to from here? Solar panels are installed on more than 2.7 million Australian homes, which means that around 75% of Australian homes still do not have solar. In the near future, we fully expect the uptake of solar batteries to increase and play a larger role in storing energy and stabilising the national electricity grid.

For more on solar energy, you can read our detailed guide to help you buy the best solar panels on the market.

If you want to run the numbers on what solar can do to reduce your electricity bills, please use our free solar calculator.